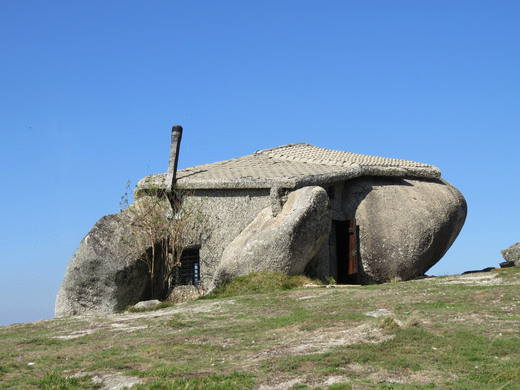 A small Portuguese cottage formed between boulders in the countryside

There has been controversy since the first photos of the Stone House, or Casa do Penedo, emerged on the internet. The Portuguese cottage seemed too unlikely to be real and doubters immediately sprang upon the home as a photoshop hoax.

Those doubting the authenticity certainly had their evidence. Most of the photos of the house were taken only from two angles, and the had clearly been edited significantly. People set up in camps of opposing internet communities, each stating their cases and hoping to sway cyberspace toward their conclusion.

After intense debate, a conclusion bolstered by a Portuguese television channel special and an article in the Daily Mall tipped the scale. Despite some artistic liberties on the part of the photographer, the house in the Fafe countryside was in fact real. The house has even been featured in a Portuguese film called “Moon.”

Sandwiched improbably between two boulders in the midst of majestic Portuguese countryside, the Stone House is a wonder. The construction was inspired by the Flintstones. The interior is simple and sparse and makes a strong architectural statement. It is also worthwhile to be reminded that in an age where anything can be fabricated, the world is a big place and holds wonders beyond photoshop.

Don’t worry it’s a stone house but you will have internet! Just rent our portable and unlimited internet so you ca share everything!