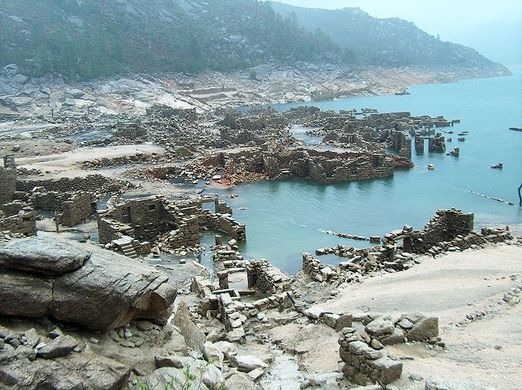 In a rare occurrence, during a particularly dry spell in Portugal’s Minho region, Vilarinho da Furna emerges from beneath the water to reveal the bare walls of a 2000-year-old town destroyed by an electric company.

In 1967, construction began on a dam that would flood areas of the River Homem, and provide massive hydroelectricity to the region. Amid some protest, the Portuguese Electricity Company paid off residents to leave their homes, as the dam would completely submerge the small village of 300 people. In 1971, the last resident left the town, and its barren structures awaited the deluge that would bury it beneath the river.

In 1972, the town was submerged, plunging over 2000 years of history in the village into water. According to oral accounts, the town was founded by Romans in the 1st century C.E., and was prosperous throughout its history. Today, the barren walls, windows and doors rise mysteriously when the dam water levels fall.

A museum dedicated to the lost city was built in nearby São João do Campo, and other commemoration efforts have taken place since the town was flooded 40 years ago. Recently, boats with transparent bottoms have also taken tourists near the village so the remains of the city can be seen and the history not lost forever.

So try to visit Portugal and get the real feel about this historical country. Use portable and unlimited internet and emerge in the culture!